Automatically refusing mortgages on properties where Japanese knotweed is found is out of proportion to the risk posed by this invasive species, new research has found.

Ecologists from global infrastructure services firm AECOM and the University of Leeds have carried out the most extensive research to date.

They assessed the potential of Japanese knotweed (Fallopia japonica) to cause structural damage compared to other plants.

Japanese knotweed is a notorious non-native species in the UK, and elsewhere in Europe and North America.

Now recognised as one of the most problematic weeds in the UK and Ireland, it is known to have a range of negative environmental impacts.

In the UK, Japanese knotweed is widely believed to pose a significant risk of damage to buildings that are within seven metres of the above-ground portions of the plant – the so-called ‘seven metre rule’ – due to its underground shoots, known as rhizomes.

When identified in homebuyers’ surveys, mortgage lenders often require evidence that a treatment programme is in place to control Japanese knotweed, entailing significant expense for sellers.

The stigma associated with the plant means that property values can be affected, even after action is taken to control it.

As well as setting out to test the accuracy of the seven metre rule, researchers examined the risk from multiple lines of evidence. All reached the same conclusion.

•  looking for evidence of the perceived threat in previous research literature;

•  assessing 68 residential properties where Japanese knotweed was found and examined data collected when knotweed was removed by excavation from an additional 81 sites. 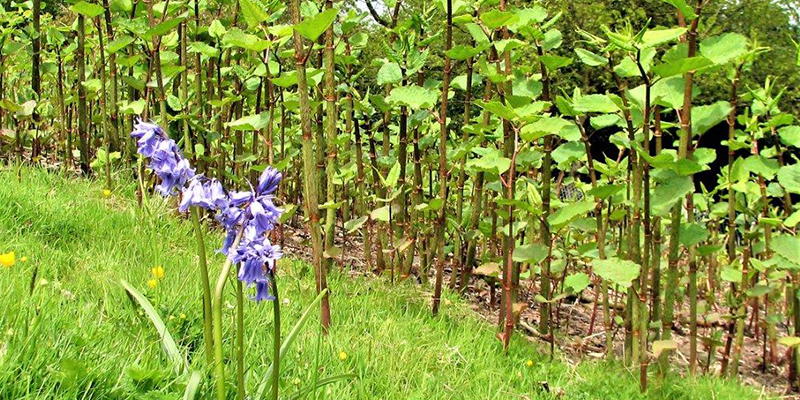 Rising shoots of Japanese knotweed (Fallopia japonica) showing how all other plants (such as the bluebell and buttercups in the foreground) are unable to survive in the deep shade of the canopy. This alien plant is becoming an increasing problem all over Britain. Photo credit: Patrick Roper

Dr Mark Fennell, Principal Ecologist at AECOM, who led the study, said: “Our research sought to broaden existing knowledge about the risk to buildings of Japanese knotweed compared to other plants.

“We found nothing to suggest that Japanese knotweed causes significant damage to buildings.”

“We found nothing to suggest that Japanese knotweed causes significant damage to buildings – even when it is growing in close proximity – and certainly no more damage than other species that are not subject to such strict lending policies.”

He added that the seven metre rule, although based on the best information previously available, was not a statistically robust tool for estimating how far the plant’s rhizomes are likely to reach underground.

“Japanese knotweed is capable of damaging built structures, but where this occurs, it is usually because an existing weakness or defect has been exacerbated.”

Co-author Dr Karen Bacon, from the University of Leeds’ School of Geography, said: “The negative impact of Japanese knotweed on such factors as biodiversity and flooding risks remains a cause for concern.

“But this plant poses less of a risk to buildings and other structures than many woody species, particularly trees.

"Japanese knotweed is capable of damaging built structures, but where this occurs, it is usually because an existing weakness or defect has been exacerbated.”

“We hope our research will inform discussions around the advice currently offered about Japanese knotweed.”

Professor Max Wade, Technical Director – Ecology at AECOM, and co-author of the paper, said: “We hope our research will inform discussions around the advice currently offered about Japanese knotweed by providing more information about the reality of its impact on built structures.”

Cause of structural damage

The authors assessed the three main mechanisms by which plants are known to cause structural damage: subsidence (usually caused by plants and trees drying out clay soils around foundations); collapse and impact (usually caused by trees falling on buildings) and accumulating pressure due to growth (usually caused by the plant’s main trunk and secondary thickening of the roots in close proximity to the trunk).

Their survey of 51 contractors and 71 surveyors, reporting on 122 properties where Japanese knotweed was present, showed that reports of defects or structural damage to residential properties were rare.

A case study looked at 68 pre-1900 residential properties located on three streets in northern England, chosen because they had been abandoned for at least ten years, were already in a state of disrepair, and so represented a ‘worst case’ scenario in terms of susceptibility to damage from unchecked plant growth.

While knotweed was identified within seven metres of 18 of the properties, it was linked to less damage than the trees, climbers and shrubs (such as buddleia, which is also non-native and invasive in the UK) also found there.

In a separate survey, of 26 contractors who provided records of 81 excavations, results showed that Japanese knotweed rhizomes rarely extended more than 4m from above-ground plants. Rhizome spread was generally less than 2.5m – well below 7m.

The researchers also found no support in the literature for the idea that Japanese knotweed is a major cause of damage to property and, overall, established it was less likely to cause damage than many other common species.

•   Fallopia japonica is a tall, herbaceous, perennial plant with woody rhizomes when mature.

•   Introduced to Europe from Japan in the mid-19th century by renowned Bavarian plant importer Phillip von Siebold, it arrived in a package he sent to Kew Gardens in London in 1850.

•   Distributed across the UK, it proved popular in Victorian parks and gardens.

•   But despite gardeners expressing misgivings about this newcomer as far back as 1898 because of its invasiveness, it was on sale in UK nurseries for almost another century.

•   It was first recorded in the wild in the UK in Maesteg, South Wales in 1886 and is now widespread across the UK and Ireland.

•   Because of its vigorous growth and impact on habitats near rivers and streams – as well as the fact it is hard to eradicate – it is now recognised as one of the most problematic weeds in the UK and Ireland and one of the worst invasive alien plants in Europe and parts of North America.

•   The species now poses a significant socioeconomic burden in the UK.

•   In the UK, legislation under the Wildlife and Countryside Act 1981 (as amended in 2010); the Environmental Protection Act 1990 and the Anti-social Behaviour, Crime and Policing Act 2014 can all be used to prosecute those failing to control Japanese knotweed or who cause it to spread into the wild. There is a duty of care regarding the proper disposal of waste containing Japanese knotweed (as per the Environmental Act 1990).

•   In response to this legislation, growing concern about Japanese knotweed, mortgage lending issues, and a rise in the number of businesses specialising in its treatment, the Invasive Weed Control Group was established by the Property Care Association (PCA) in 2012.

•   This latest research complements a recent paper published by academics at Swansea University which looked at effective ways to tackle Japanese knotweed.

‘Japanese knotweed (Fallopia japonica): An analysis of capacity to cause structural damage (compared to other plants) and typical rhizome extension’, by Mark Fennell, Max Wade and Karen Bacon, is published in PeerJ.

Further information for members of the public with concerns about invasive species and their property is available from the Property Care Association.