Challenging artists and scientists to collaborate on new approaches to the creative process, the £15,000 DARE Art Prize is open for applications.

Now in its third year, the prize is part of the groundbreaking DARE partnership between the University and Opera North – in association with the National Science and Media Museum and The Tetley.

It will be awarded to an innovative, ambitious, early-career artist who is motivated by the opportunity to work in partnership with leading scientific researchers at the University.

The prize includes a bursary of £10,000 paid quarterly over twelve months, a budget of up to £5,000 for resources to create and present new work, and the chance to engage with scientific researchers and artists who share a vision, and whose specialist expertise can support the creation of something new.

There are further opportunities for residencies at the National Science & Media Museum in Bradford and The Tetley, in Leeds. Access to musicians, studio space and resources from Opera North may also be available.

“The thinking and experiences of artists and scientists are often thought to be mutually exclusive – the DARE prize shows this is not the case.”

Professor John Ladbury, Professor of Mechanistic Biology at the University's Faculty of Biological Sciences, said: “The thinking and experiences of artists and scientists are often thought to be mutually exclusive, however the DARE prize not only shows that this is not the case but reveals the beauty and excitement of a symbiotic creative relationship between the two fields. I am delighted by the ingenuity and imagination shown by applicants and recipients.”

The winners of the two previous DARE Art Prizes each spent a year working on strikingly different but equally inventive projects.

Artist and researcher Anna Ridler, who won the 2018-19 Prize, spent her tenure investigating the intersection of machine learning and nature.

Working with scientists in the University’s School of Psychology and focusing on the practice of drawing, she has been exploring the functions of memory and the roles of the left and right sides of the brain, and how their operation might be embodied in a work of art.

She said: “Winning the DARE Art Prize has been completely transformative to my development as an artist. It has provided the space to develop my practice in ways that wouldn’t have otherwise been possible.

"My collaborations with researchers at the University have ignited a line of inquiry that I will be exploring over the coming months and years.”

“Winning the DARE Art Prize has been completely transformative to my development as an artist.”

Composer Samuel Hertz, winner of the inaugural prize, worked with low-frequency infrasound, delving into climatology, the environment and the paranormal, with outcomes including a musical transcription of a glacier melting and a piece of music featuring sounds inaudible to the human ear.

Individual, independent artists working in any discipline are invited to apply for the latest DARE Art Prize by submitting a CV and a 500-word proposition that summarises the area of scientific interest, from astrophysics to climate change, microbiology to nutrition; evidences an ambition to create something new and the germ of an idea of what this might be; and expresses a genuine wish to engage with academic researchers, expertise and resources at the University. 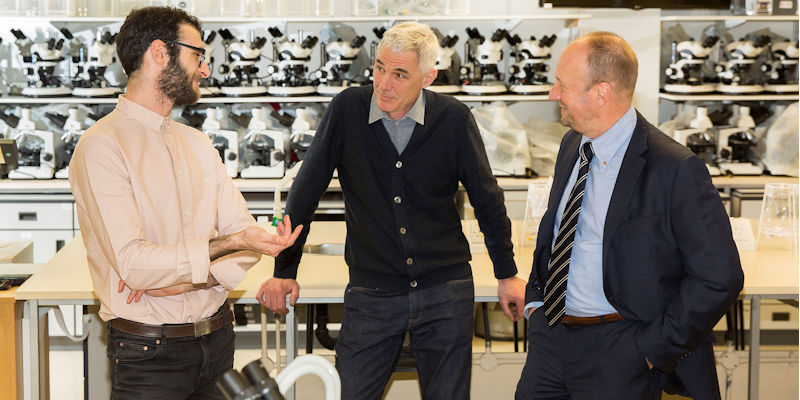 There are no restrictions on the form of the outcome: it could be any artform or channel, a performance, a poem, an interactive website or a song cycle for example - but the project must be achievable within twelve months ending in May 2021.

Applications should be sent in the form of a single pdf or Word document to dare@operanorth.co.uk, before 1200GMT on Thursday 30 January 2020. For more information visit dareyou.org.uk

Applications will be assessed and shortlisted by DARE, including John Ladbury, and Dominic Gray, Projects Director, Opera North.