Engineers have developed a robot that has successfully navigated one of the narrow shafts of the Great Pyramid - in an attempt to solve one of the big mysteries in Egyptian archaeology.

And their story features in a documentary film just released on the Ancient Architects YouTube channel.

‘The Robot, The Dentist and The Pyramid’ follows a group of research engineers and scientists, some from the University of Leeds, who accepted a challenge to build a robot capable of exploring the pyramid.

Watch the documentary -'The Robot, The Dentist and The Pyramid'

The lightweight robot had to travel along a shaft that is just 20 cm by 20 cm, a smaller cross section than a sheet of A4 paper, and manoeuvre along its 60 metre length. The challenge was to survey and film what was inside – and crucially, not cause any damage.

The film reveals intricate coloured markings on the floor of a small, hidden chamber.

Markings or symbols found on the floor of a small chamber hidden in the passageway.

To coincide with the release of the film, the scientists are making available all nine hours of the recorded video so it can be studied by archaeologists and ancient historians.

The Great Pyramid is the biggest and oldest of the three pyramids that stand on the outskirts of Cairo in Egypt. It is believed to have been built around 4,500 years ago.

Over the years, various archaeological teams have explored the pyramid, reaching what is known as the Queen’s Chamber. Those archaeological digs found, hidden behind a false wall, a narrow shaft that climbed at a 40-degree angle up into the pyramid.

But those explorations had resulted in damage to the shaft - and no one had explored where the shaft led.

In 2010, Rob Richardson, Professor of Robotics at Leeds, was the technical lead of the Djedi expedition. He and a small group of colleagues had accepted a challenge thrown down by Hong Kong dentist and inventor Dr Tze Chuen Ng to design and build a robot that could reach the end of the shaft and find what, if anything, was there. Crucially, it had to survey the shaft without causing any damage to the pyramid. 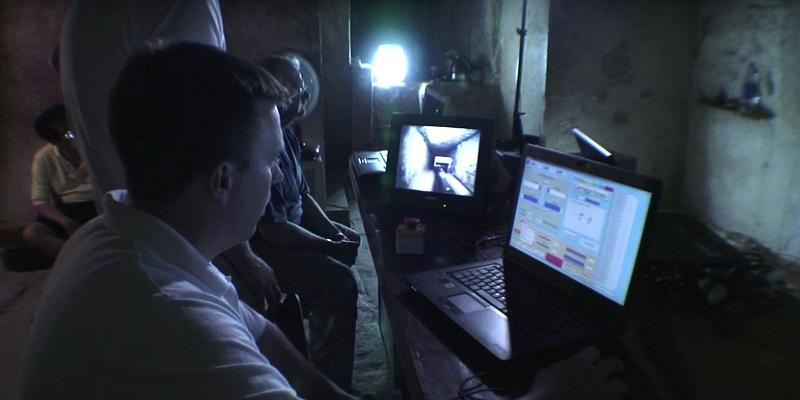 The research team, based in the Queen's Chamber in the Great Pyramid, remotely operating the robot.

Professor Richardson, part of the Robotics at Leeds research group, said: “This design was certainly challenging. The robot had to be extremely lightweight – and in the end we got it down to 5kg. Because it was so light, it did not require a lot of power – in the end, the challenges started to become opportunities.

“We developed a system that moved the robot very gently through the passageway.”

The meticulous design paid off. The robot was able to navigate the shaft and record exclusive footage of the inside.

Professor Richardson said: “No one knows the purpose of the shaft: there has been speculation that it could be an air vent or perhaps access to a burial tomb.

“About 50 metres along the shaft – several metres before what we think is the end, there is a stone put in place to block further access. We do not know what that stone is blocking access to. We were able to get a camera past the stone – it revealed a small chamber with intricate symbols painted on the floor.

The robot’s camera also revealed a second blocking stone which they could not get past – so what lies beyond that second stone, at the end of the shaft, is a question that remains unanswered. The mystery of the Great Pyramid continues.”

The project to understand the Great Pyramid was cut short because of growing security problems in Egypt.

Professor Richardson commissioned independent filmmaker William Westaway to use the video that had been recorded to make a film about the project.

Mr Westaway said: “This is a fascinating story: one that sheds light on aspects of ancient civilisation but in a twist, reveals how the latest thinking in robotic design and engineering has opened that window on the past.”

Matthew Sibson, who runs the Ancient Architects YouTube channel, said: “I’m thrilled to be releasing the documentary exclusively on YouTube, but the nine hours of raw footage is what really excites me as an independent researcher of ancient history.”

The raw footage recorded by the robot can be seen in two parts online: Part 1 and Part 2