Researchers are investigating whether a kinder form of radiation known as T-rays could be used to image and treat patients with skin or bowel cancer.

T-rays or terahertz radiation contain lower levels of energy than X-rays and are less damaging to biological tissue.

The Engineering and Physical Sciences Research Council has announced an £8 million project involving the University of Leeds and Leeds Teaching Hospitals NHS Trust, along with the Universities of Warwick and Exeter, and University Hospitals of Coventry and Warwickshire to develop a new generation of imaging and treatment equipment based on T-rays – a technology called terabotics.

The project, which starts in September, runs for five years.

Early phases of the project will involve creating miniature T-ray probes. Like ultrasound probes, they could be used to image the skin or inserted into the body to examine the bowel and colon. T-rays can reveal changes in human tissue due to cancer. It is hoped to link the T-ray probes to an artificial intelligence system that would instantly tell healthcare staff if a cancerous lesion had been identified.

Later in the terabotics project, the T-ray probes will be integrated with surgical robots being developed at the University of Leeds.

Engineers at Leeds have spent more than 10 years working on a semi-autonomous robotic system designed to revolutionise colonoscopy investigations, where a probe is passed into the anus to examine the bowel and colon. The robotic system is designed to be less painful for patients – and can autonomously navigate the complex structure of the colon. 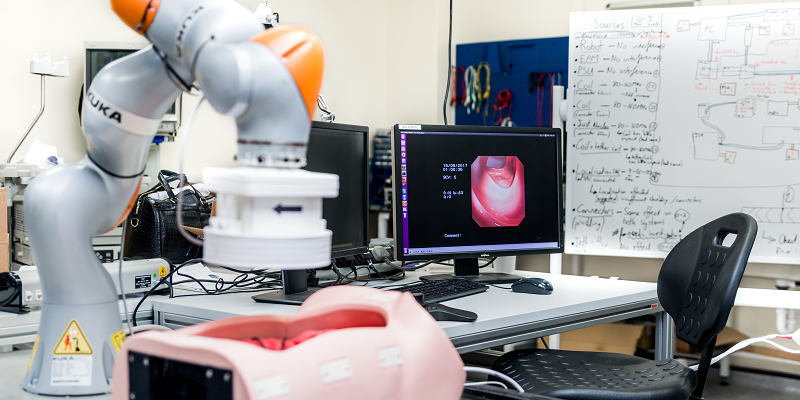 One of the robots being developed at Leeds to assist healthcare professionals with colonoscopy examinations. Picture: University of Leeds.

When combined with the T-ray sensors, researchers hope the surgical robots will enable healthcare staff to identify cancerous changes to the cells without having to take a biopsy, which delays treatment. Instead, they would be able to map the extent of the cancerous or pre-cancerous cells, and remove them, there and then.

Pietro Valdastri, Professor of Robotics and Autonomous Systems, in the School of Electronic and Electrical Engineering at Leeds, said:  “Robotics is increasingly used in the operating theatre as it brings superior accuracy and unloads some of the burden of the procedure from the surgeon.

“At Leeds, we are developing the next generation of surgical robots to detect colorectal cancer earlier and remove it more effectively.

“Adding T-ray perception capabilities to our robots is a new exciting avenue of research that has the potential to improve cancer patient quality of life in the next five to 10 years.”

It is hoped to test the technology in a patient trial in collaboration with Leeds Teaching Hospitals NHS Trust.

The aim is for T-ray technology to speed up the diagnosis and treatment of some of the common cancers.  Bowel cancer is the fourth most common cancer in the UK and the second biggest cause of cancer deaths.  A form of skin cancer known as basal cell carcinoma has increased in the UK by around 250 percent since the 1990s, with 137,000 new cases diagnosed each year.

Professor Emma Pickwell-MacPherson, from the University of Warwick’s Department of Physics, who is leading the terabotics project, said: “Somebody might already be diagnosed with cancer, but the actual extent of that cancer is often not known until surgery starts.

“In skin cancer patients, the terahertz probe will image the visible tumour and the surrounding area to better determine the extent of the tumour that is beneath the surface. This will enable the whole tumour to be removed in one go, rather than incrementally. In turn, this enables better skin graft planning and speeds up the procedure.”

The project is among 20 innovative projects announced by the Engineering and Physical Sciences Research Council - part of UK Research and Innovation - to revolutionise healthcare, improve treatments for millions of people with a wide range of conditions and save the NHS money.

The projects are supported by £30.8 million of funding. Four projects were co-funded by UKRI’s Medical Research Council.

EPSRC Executive Chair Professor Dame Lynn Gladden said: “Technologies and approaches pioneered by UK researchers have the potential to revolutionise treatment for a wide range of conditions, from bowel cancer to diabetes.

"The projects announced today exemplify this potential and may play a key role in improving the lives of millions of people.”

For further details, please contact David Lewis in the press office at the University of Leeds: pressoffice@leeds.ac.uk