Research led by Leeds professors has led to a better quality of life for thousands of people around the world who have received tissue regeneration treatment.

The academics behind the research, Eileen Ingham and John Fisher, from the Institute of medical and biological Engineering (iMBE), have developed a process to wash cells and DNA out of donor tissue, removing the material which the immune system could reject.

This means when the ‘decellularised’ tissue is implanted into a body, its existing cells colonise the new material rather than reject it. The implanted tissue then grows with the body, meaning multiple operations to replace rejected tissue are not needed.

The pair’s invention has put them in the running for a prestigious 2018 European Inventor Award run by the European Patent Office.

Now the University of Leeds is asking everyone to vote for Eileen and John before Sunday 3 June, to help bring the prize to the city.

Professor Fisher, who has worked on developing the decellularised tissue since the 1990s, said: “The pride we feel about our work, knowing it is genuinely making a difference to people who need tissue regeneration surgery, is immense.

“We were really pleased to be shortlisted, because technical science and medical engineering breakthroughs are often very specialised. Hopefully by raising awareness of our work, more people will see how important it is to treating painful conditions.”

Professor Ingham, a medical immunologist, has previously spoken of her commitment to the research, and excitement about being shortlisted in the awards.

The technique has already resulted in the creation of replacement skin, heart valves and tendons. It is also being developed to replace tissues that are a combination of hard substances such as bone and soft tissues, including ligaments, meniscus, or cartilage.

Other researchers have taken the professors' lead and are exploring the technology to create even more complex cellular structures such as nerves.

The married couple’s research was spun out from the University to form a company called Tissue Regenix, which is based in Leeds, and uses the decellularisation process commercially under the brand name dCell Technology.

The company’s Chief Executive, Steve Couldwell, said: “The benefits of Eileen and John’s work has helped thousands of patients across a multitude of clinical areas; from wound care and surgical reconstruction in the USA, to paediatric heart valves in Brazil and orthopaedic sports medicine in the EU.

“With the ongoing commitment of Eileen, John and their research teams, the future potential of dCELL Technology is vast, and offers patients and clinicians alike a significant and novel treatment option.”

The UK’s research councils, which channel government funding to academic studies, have also recognised the value of the decellularisation process.

Katie Daniel, Manufacturing the Future Lead at the Engineering and Physical Sciences Research Council (EPSRC), said: “The decellularisation technique is already having an impact on the health of patients with chronic diabetic ulcers and heart disease.

"The invention demonstrates the power of bringing together researchers from different disciplines to solve real-world problems, and how long term investment by the EPSRC can lead to the creation of new businesses and jobs.”

Alex Chaix, joint Head of Knowledge Exchange and Commercialisation at the Biotechnology and Biological Sciences Research Council, added: “We’re delighted to see Eileen Ingham and John Fisher on the shortlist for the European Inventor of the Year award. Their decellularisation technique received support from across UK Research and Innovation and is producing life enhancing products.” 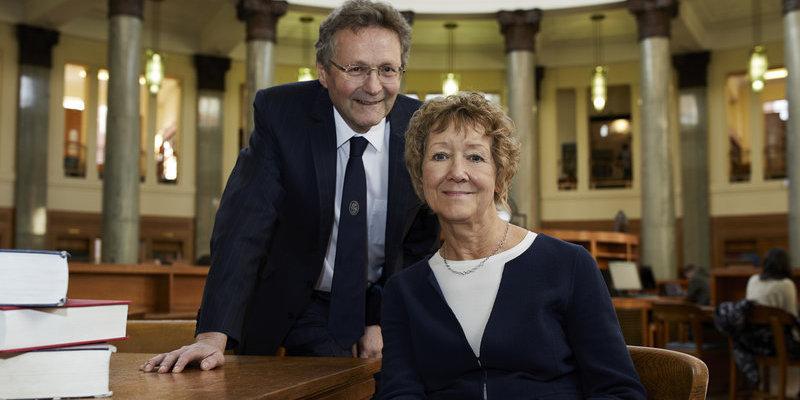 Professor Fisher and Professor Ingham in the University's Brotherton Library.

Further support has come from students of both professors, who have supported hundreds of undergraduates and PhD researchers during their years at Leeds.

Matina said: “I was lucky enough to meet Professor Ingham during my final year and the brief time I spent with her was simply not enough! If I had to describe her with one word, I would choose "inspiration".

“Eileen has an incredible and curious mind and one can tell that she loves her research but also has great love for people. My humble opinion is that those who dedicate their lives towards the benefit of others and spend endless hours in the lab should get the recognition they deserve.”

The Leeds professors are competing against 14 other inventions to win the public vote award, which will be announced by the European Patent Office on 6 June.

Journalists with questions or interview requests should contact Peter Le Riche at the University of Leeds press office on +44(0)113 343 2049 or email p.leriche@leeds.ac.uk