In this Section: Masters courses 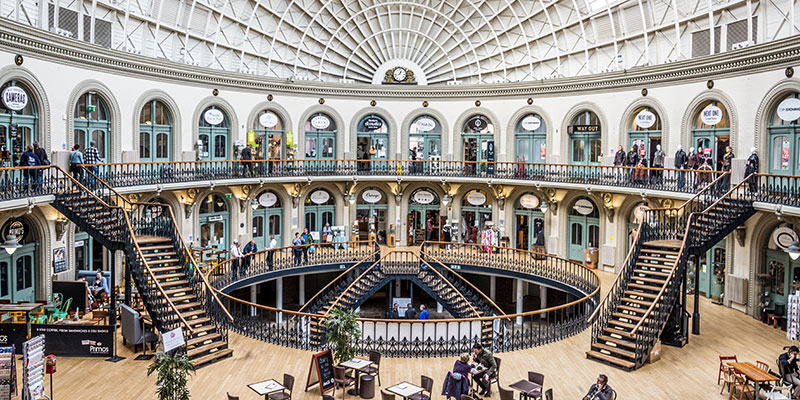 Leeds is a bustling city surrounded by beautiful countryside. Our campus is a ten minute walk from the city centre and as a student here, you’ll have access to a thriving cultural centre, hundreds of bars and restaurants and some of the best shopping in the UK.

The Carriageworks has an exciting mixture of drama, musicals, dance, pantomime, exhibitions and community events and City Varieties is a rare surviving example of a Victorian music hall. The University also has its own licensed theatre space on campus, stage@leeds which is open to the public and host to a wide variety of performances.

As well as city centre multiplexes, you could visit smaller independent cinemas including the Hyde Park Picture House – located close to campus and the country’s last remaining gas-lit cinema. The Leeds International Film Festival runs every November and is chance for film fans to enjoy two weeks of premiere screenings, world cinema, theme nights and all the latest in cutting-edge film and documentary.

Leeds City Museum takes you through the city's 800 year history with hands-on and audio-visual displays, exhibitions and interactive games. The city is also home to the Royal Armouries which displays part of the national collection of arms and armour and holds many treasures including the world's only suit of elephant armour.

Kirkstall Abbey is a ruined monastery a few miles from campus and the city centre. The Abbey was founded in 1152 and disestablished during the reign of King Henry VIII. It now sits in parkland and is open to members of the public.

Leeds City Art Gallery houses a world-class collection of 20th century British art with works by Francis Bacon, Stanley Spencer and Barbara Hepworth. The Henry Moore Institute owns a number of works by the artist and has regular exhibitions from other sculptors.

Our own Stanley and Audrey Burton Art Gallery and Treasures of the Brotherton Gallery showcase the University's exceptional collections of fine art, artefacts, rare books and maunsucripts.

The University's Refectory is a legendary music venue. Led Zeppelin, the Rolling Stones and Jimi Hendrix have all played here as well as more contemporary talent including the Arctic Monkeys and Ed Sheeran.

Leeds’ First Direct Arena and the O2 Academy attract world-famous acts. The city also has a thriving underground network of smaller venues which showcase the best in new music, including Brudenell Social Club, Belgrave Music Hall and The Key Club.

Leeds also hosts the prestigious Leeds International Piano Competition (The Leeds), with most of its later stages taking place in the University's Great Hall. The Leeds International Concert Season is an annual music programme featuring jazz, world music, brass, classical and chamber music. Major music festivals are held around the city, including Leeds Festival and Live at Leeds.

The University’s own International Concert Series is hosted in the Clothworkers Centenary Concert Hall.

Whatever your taste or budget you’ll be able to find what you want in Leeds. We have a number of great places to eat and drink across campus and in the city centre you can find cafes and restaurants serving food from all over the world.

For comprehensive up-to-date listings of pubs, clubs and restaurants check out Visit Leeds.

Leeds has a well-deserved reputation for being great for shopping. You can find a range of high-end shops housed in historic buildings as well as all of the high street shops you’ll need.

Stylish arcades in the Victoria Quarter and high-end department store Harvey Nichols sell top designer labels. Victoria Gate also houses a number of high-end shops as well as the largest branch of John Lewis in the North of England. The Leeds Corn Exchange, built in 1864, now houses a number of independent retailers.

All the leading high street shops can be found on Briggate, a pedestrianised street in the city centre, or in the Trinity Leeds complex, which also has a selection of bars and restaurants.

Kirkgate market is the largest covered market in Europe — the Marks & Spencer chain was founded in this magnificent Edwardian building in the late 19th century when it started operating there as a penny bazaar. The market still sells daily essentials such as fruit and vegetables.

Leeds has several major sports teams and the city is also a gateway to some of the finest cycling, walking and climbing routes in the UK.

Since 1891, Headingley Carnegie Cricket Ground has hosted international Test matches and Twenty20 games as well as being home to Yorkshire County Cricket Club.

Leeds United Football Club is one of the longest established teams in the country and has an illustrious history of great wins and dramatic comebacks – including winning England’s top division on three occasions. Leeds also has rugby league team Leeds Rhinos and rugby union club Yorkshire Carnegie.

And if you want to take part in sport yourself, as well as the University's own sports centre Leeds is well catered for by a range of sporting facilities and gyms.

At Leeds, you’ll be within easy travelling distance of beautiful countryside including the Yorkshire Dales. The Yorkshire countryside is ideal for outdoor activities such as walking, climbing or mountain biking.

To find out more about what’s on offer in and around Leeds and Yorkshire visit the Welcome to Yorkshire website.

“People in Leeds are very friendly and welcoming too. It’s a student-oriented city and it feels like home. ”

Read More
Read More
Back to the top